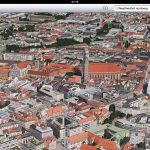 Apple today pushes its network service provider to its limits: in addition to the expected iOS 6, there is also an update for MacOS to version 10.8.2, for iPhoto as well as XCode (to version 4.5). Akamai reports 78% traffic above normal - especially the not exactly small update for iPad 2/3 to iOS 6 should put a lot of load on the servers. In addition to the well-known "200 new features" that iOS 6 brings at least for iPad 3 and iPHone 4S (including Siri for iPad 3), MacOS 10.8.2 brings the improved Facebook integration to the desktop as well (besides the obligatory improvements in stability and speed).

From the day after tomorrow (21.09.2012) the iPhone 5 will be sold in the Apple stores, from 08:00 you can try to get hold of a device. Then it will become apparent how well Apple has taken precautions this time to absorb the expected rush - nobody should be really surprised by the demand anymore.