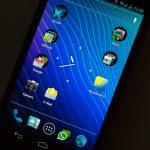 I have to admit: until now, Android has always put me off a little bit. Too little app selection, no consistent user interface and a cruel update policy. Then I found a relatively inexpensive Samsung Galaxy Nexus fallen into the fingers, so I want to give Android (now 4.0.2) a chance. About my smartphone background: until now I was an iOS user. Started with an iPhone 3G, then skipped the 3GS and currently on the road with an iPhone 4. Before that, Nokia smartphones for years, starting with the Nokia 6600 and ending with the E90 Communicator. Now the Galaxy Nexus.

The first impression after opening the package: what a huge display. At 4.65 inches, it is significantly larger than the iPhone 4 (3.5″) and slightly concave. After switching on: rich colors, a smooth startup animation. Then my first contact with Android 4.x "Ice Cream SandwichThe user interface is displayed smoothly, and the launcher opens immediately without delay. The functions of the constantly displayed menu are easy to understand: on the far left, it goes back one step, in the middle to the home screen (or, if the button is pressed there, into the launcher) and on the far right, the currently running applications are listed (which can be ended with a swipe to the left or right). Unlike iOS, Android is capable of true multitasking, so I quickly learned that you should pay attention to what's sucking on the battery in the background.

After the basic setup was done (I also manage my mails, appointments and contacts via Gmail on the iPhone, so this data was easy to transfer), some apps had to be loaded. I noticed that not everything is designed for the display resolution of 1,280 x 720 pixels. The font in the Spiegel Online app is unfortunately too small, and images are also not in the correct format. The website does a better job here. Other apps are not a problem, but an actually simple "clock" widget led to a constant CPU load - poison for the battery performance, which I cannot judge yet.

Speaking of websites: Default browser is of course a Webkit variation, on which actually all smartphone vendors apart from Microsoft rely. In parallel, I have installed the beta 10.0 of Firefox Mobile (Fennec), which makes it a bit easier to correctly display websites that do not have a mobile version. Furthermore, most of the plugins known from Firefox are available here. With mostly white web pages, however, I noticed that there are better display technologies: a slight grey haze appears when the brightness is set to automatic. If you adjust the brightness yourself, this effect is reduced. The LCD of the iPhone 4 ("Retina Display") remains superior to the Pentile AMOLED of the Samsung Galaxy Nexus despite a similar pixel density - even though the latter convinces with very good sharpness, the slightly "dirty" impression remains.

Conclusion so far: with Android 4.0.x (my Nexus should be there soon), I'm happy with it. Update to 4.0.3 over-the-air (OTA)), Google is definitely on the right track. Also, the guideline that all manufacturers have to deliver the pure Android UI along with their own solutions will hopefully simplify app development. Time will tell if the system (and the Galaxy Nexus as a hardware base) can become dangerous to the iPhone. After a good day, I don't miss iOS - next I'll be trying out the Nexus as navigation in the car; This is where Sygic with TomTom maps go head to head with Navigon on the iPhone 4. And of course there will be updates here as I continue with Android....